skip to main | skip to sidebar

This project is finished at last. I'm happy with the result, but I basically didn't sleep for the past week. I ended up titling the film "Forest Folk"

At first I had "Fairy Folk" but I didn't want to give away the fact that there would be fairies involved. I wanted to keep the "folk" part of the name because it's based on a folktale and uses folk music (not like the genre folk... but like folk.)

I did all my backgrounds in 2 days. That's 32 backgrounds. Some parts were copied over from one to another, but it was still a lot of backgrounds to do. Here's a big image with the majority of them in order (I left out some that are almost blank or almost repeats. They were all done in Photoshop, and I used textures over them because I like that look. 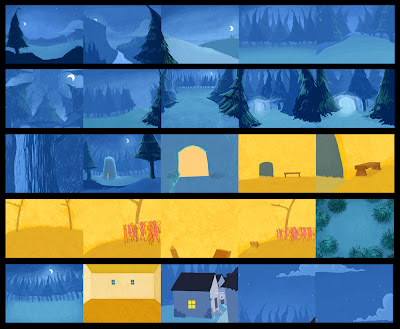 Here are a couple of the ones I like a lot bigger. They're mostly the opening shots, which aren't onscreen for very long - if I had the chance to edit timing and stuff, that would be something I would change. The opening shots went by just a touch too fast. 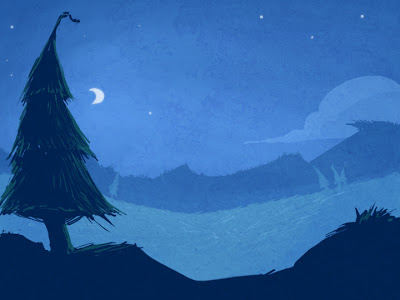 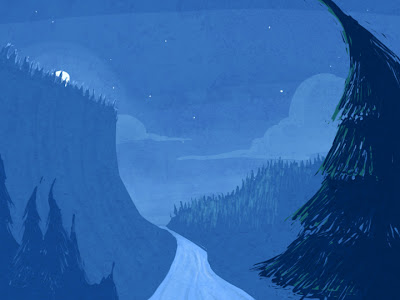 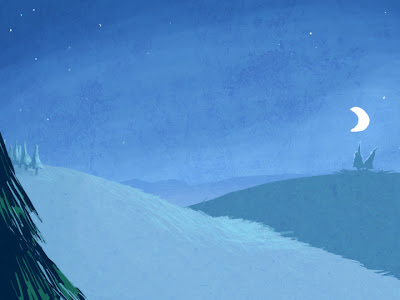 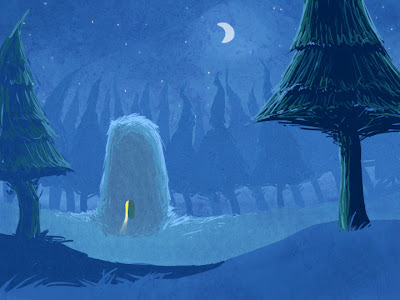 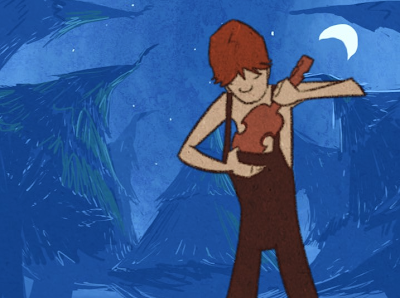 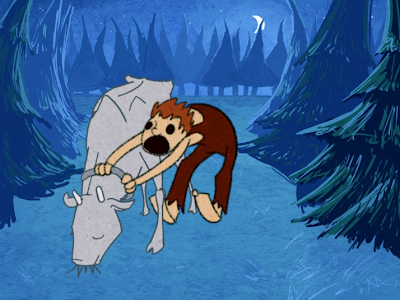 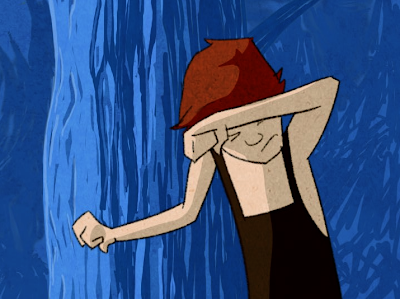 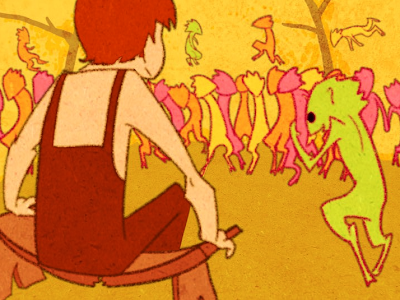 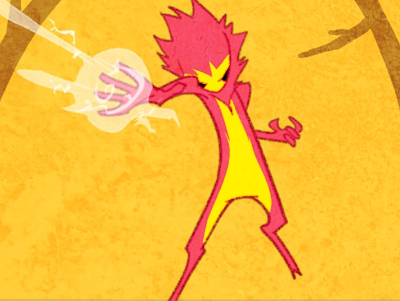 I really enjoyed making this film, I learned a lot while doing it, I'm so glad it's finished. Yet, at the screening I found myself thinking about what I want to do next - doesn't my brain remember that making a film is why it didn't get any sleep for 5 days? I think this is how people end up with more than one child.

A break from animating

I took a break from animating and did some color sketches. These are probably going to look oversaturated on other computers; my monitor seems to be a bit wonky, color-wise. I already see a lot that I want to change, but take a look. It's turning out to be challenging to pick colors for the guy because they have to work against the ground and against the wall. I might go with what I have in the animatic and make the ground a similar color to the wall.

I used to want the whole place to appear to be made out of dirt, but now I'm not so sure it matters. I kind of have gotten used to the yellow look. 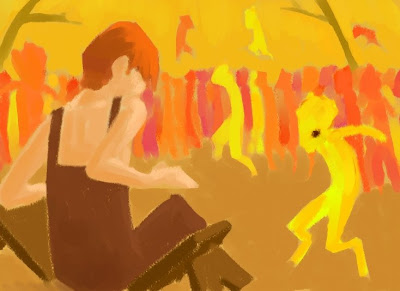 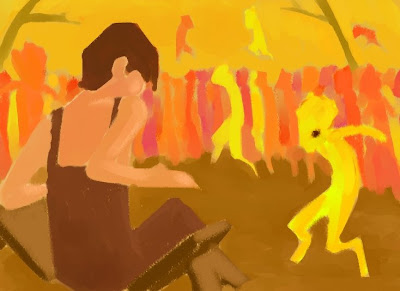 I keep some stuff in my sketchbook, notes, storyboards, the occasional page of reference, but that stuff never makes it onto the blog. So since this is supposed to be a blog about the process of making this project, I thought I'd post some of that stuff.

Here's a page of storyboards: 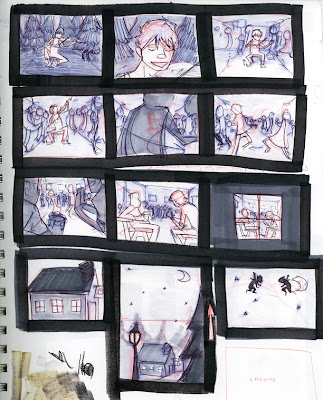 Here's a page of reference: 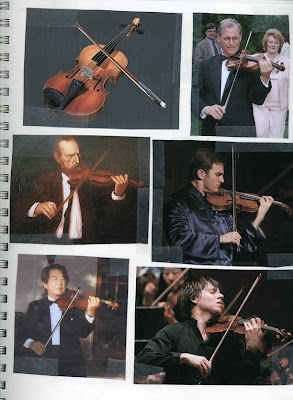 And some thumbnails for poses because I seem to be able to draw more dynamic things on paper than straight into the computer sometimes. This isn't the best example for dynamism though

And last of all, this is how I time stuff out. This is for the scene where the guy wakes up in the clearing. I'll probably be posting the animation for that next week. I'm just about done with the rough animation for that. On the left you can see frame numbers, followed by time code, followed by description, followed by my own version of music notes. The numbers on the right were to assist me in converting from timecode to my flash file. 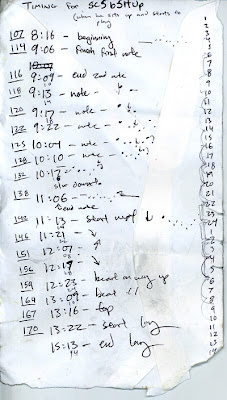 Animation with music will be posted soon! Stay tuned.

The pacing is a little faster than I want, but overall I'm pleased enough with how this week went. There's a little color test in there. I wish color looked the same from PC to Mac - it seems to be a huge difference. I think I'm starting to get a better handle on how to animate the fairies. Bonus feature: Play any music and the fairies seem to dance to it.

New Storyboards for the End

So, we had the big seminar thing with all the crits. Very helpful. Except about half the people seemed a tad bewildered by the ending. How does he get into the tavern? Why is he in a tavern? What happened to the fairies? Etc.

It's something I was always a little worried about. Last year when we were first figuring out the stories, there was an idea kicked around that I ended up feeling wasn't true to what I wanted to do. However, I don't really want to sacrifice good storytelling to try to squeeze in a story that doesn't quite fit. So the alternative ending would involve a little bit of a change towards the beginning as well. Here's how the story would play:
The guy is walking through the woods with his cows but they don't really stay together as a herd that well. His playing wouldn't be very good here. A couple run off the road, and he has to chase them down. He tries to go after them both, but gets distracted by the fairy music. The middle would be the same. When he wakes up after the fairies, he'd be a bit befuddled, but start to play. He stands to play, his eyes are closed. As he plays, all of his cows come out of the woods and carry him towards town. You would see a couple fairies pop out of the woods behind him and do a little dance before flying off into the woods. The End.

Here're the boards for the new ending. 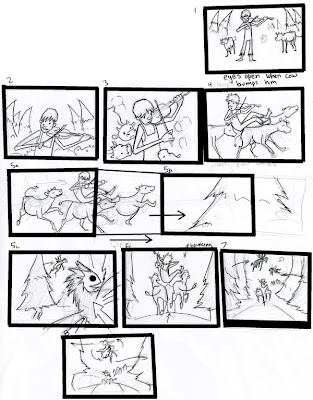 I'm not really sure I like it better... but I think that it might pull the story together more neatly? Should it still go back to the tavern? There will be a town in the distance that you can see. You can sort of see it in the last couple frames of the boards.

Also, just for fun, here's what my boards look like just in pencil. I like it, it's just harder to see. 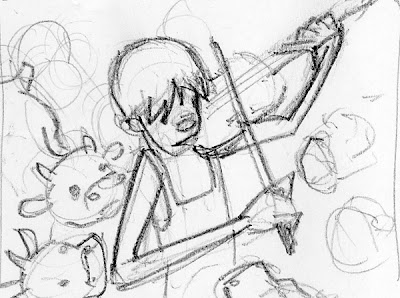 Passed out in the clearing

Ok, I have two choices here for the guy passed out in the clearing after the faeries do their magic POOF! thing. This would be a shot from above of the guy lying down. One is basically what I had in my animatic/storyboards, the other is a different position. I'm having a curiously difficult time choosing. So, I don't know how much people look at this blog, but any opinions would be appreciated. I think the first has a more elegant shape on screen, but the second is sillier. 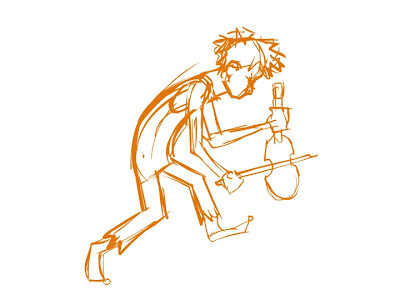 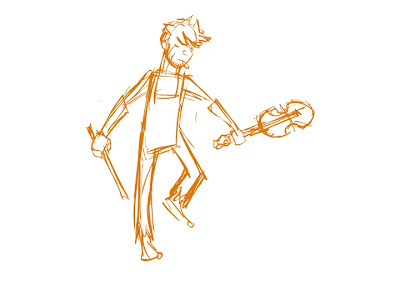 Here is some rough animation. I'll be putting up more later this week. I have yet to make changes like exaggerating motions and the like.

Here's a walk cycle for the cows both from the back and side.


This is from when the guy is riding the cow and he sees one of his herd wander off the road, so he stops playing and dismounts. I'm going to redo it, however. It's just not really the right motion.


This is after the guy gets off the cow. He's watching his cow that just walked off the road and putting his violin away.


Here the guy has just chased his cow into the woods and he hears some music, so he looks up.


That's all I've got for right now. I'll post this week's animation later this week.

This blog is dedicated to my senior thesis at USC. It's a three minute animated film about a farmer guy who's herding his cows through the woods when he stumbles across a faerie party. And while faeries are crazy partiers, they are none too inviting.

Emily
California, United States
If you want to see more of my work, head on over to monsterlings.tumblr.com